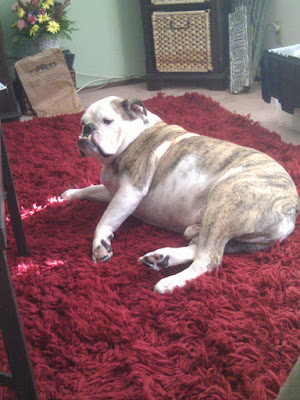 It was a year ago that Apple guy and I had to put Spike down. I still miss him immensely and not a day goes by that I don’t think of him in some way. To this day, there is a hole in my life where he used to be. No matter how much I love little Cooper, I still miss Spike. Here is just a quick shot of the hundreds I have of him. He was only in my life for just under 2 years but he brought me so much joy. I still remember the first day I met him. . .

Due to timing and cost, Spike arrived in SF before Apple guy. We had decided it best to ship him cross country instead of by air to avoid not only the extra cost but also the potential health risks. As soon as the guy opened the back of the trailer and pulled his cage out, he bounded right toward me as if he knew me. He ran up to me and promptly rolled over and presented his belly to be rubbed. I of course complied and knew I’d have no reservations about him coming to live with me. I took his blankie1 and collar and introduced him to his new home. After lots of affection and attention later, he investigated his surroundings for a bit and then decided it was nap time. This new place was his home for the rest of his life.

As time passed, he became such a huge influence in my life and brought me happiness I’d never experienced with an animal before. I never once regretted his presence or the attention he needed even after Apple guy and I split up. His death was a great loss and is still very painful for me. Having raised him from a pup, I’m sure Apple guy’s sense of loss is that much greater.

Much like Cooper, Spike was a rescue. Apple guy rescued him when he was not much younger than Cooper and gave him a life of joy and happiness. Coming to live in SF seemed to agree with Spike and he quickly settled into a life of leisure. lol He was vibrant and mobile up until the very end. His last sight in this world was of us and I can’t think of a better way to go. He was loved and he knew it.

Spike, where ever you are, you are missed and most definitely not forgotten. You brought light and joy to my life and I will always be thankful for that.

I miss you Spikey.