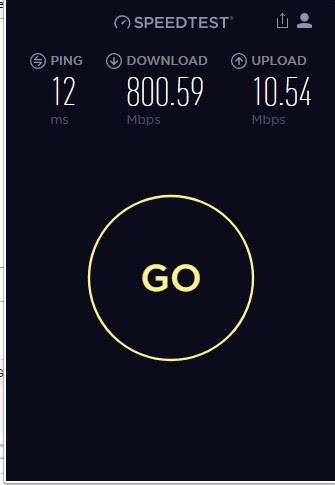 So far it has paid off. The service isn’t quite gigabit speeds and fluctuates quite a bit. It will go as low as 200 and as high as 800 Mbps. [1]megabits per second  It hovers around 500 Mbps consistently. They need a tech to work on the pole on my street to increase it (allegedly). And while that might seem rough, think about it for a second. My lowest speed is double what I was paying for Comcast.  It’s $70.00 a month for the first year including the modem/router. I’m saving $100.00 a month right off the bat. The savings will decrease as we add other necessary services. We already had Hulu so I am not counting it toward the monthly savings.

I am adapting, albeit slowly. We signed up briefly for Sling TV, which for some is probably a good deal. However, unlike Hulu, you cannot skip commercials, even on shows you DVR’d to their cloud. [2]Yes, I know Comcast owns a chunk of Hulu. I can’t avoid them completely it seems  I got rid of it before the trial had even expired. I’d rather just buy the shows I like outright and watch them commercial free. And while that does add up in the short term, in the long run I still save more money. And frankly, I like spending money on things I value vs endless channels I never even tune-in once.

If you don’t mind commercials, Sling TV and/or Vue are probably the two best for choice and flexibility. Hulu is decent but lacking in many areas;however, it allows you to watch almost everything commercial free. [3]A few of the most popular shows require you to watch a commercial before and after.  YouTube TV is pretty basic but if you watch the basics you’re covered. I don’t know if it forces you to watch commercials or not as I didn’t try it out. It was missing several of my favorite channels.