I accidentally deleted the original post so here it is again. . .

So, if you’ve been following along on social media, Cooper had a unplanned vet visit this week. [1]Actually, two visits because this daddy is so absent minded. He
developed a severe limp in his left leg. It gets a bit weird because overnight the
limp switched from one leg to the other.

He has developed limps before but they were almost always from him jumping too much from furniture. They also don’t develop very often. He’s had two episodes in just under a month and this last one was one of the most severe. I always give it 24 hours to see if he improves. This last time showed very little improvement the next day. I was concerned enough I missed work to get him checked out.

We had to go back a second time as I wasn’t thinking and fed him the first day. Most dogs need to be sedated for X-rays as they can’t stay still enough to get clean
images. Bullies are also much more likely to aspirate under sedation with food in
their bellies, so we couldn’t get them done on the first visit. They did pretty much
the same physical exam I did and couldn’t find any signs of discomfort or abnormalities.

There was improvement in his gait the second day which gave me hope. I think the second visit also made him a little less nervous. [2]He still remembers being left at a animal hospital when he was abandoned. He wasn’t at all alarmed when they led him away. Tangent/ The vet is so accommodating with me too. To keep his stress down, I’m always in the room as he is led away and I’m always in the room before he is brought back. It really seems to calm him. /tangent.

I knew he had a bit of arthritis from his previous episodes. I knew it would be part of the diagnosis. However, I was a nervous wreck worrying about tumors or cancer. He could have had unusual growths, cysts, bone spurs/fractures, ligament/joint tears, bad knee joints…the list goes on but cancer is the number one non-traumatic cause of death in dogs. Daddy was a bit anxious!

Turns out it wasn’t any of those, thankfully. As expected, he does have arthritis in
the lumbar region of his back. He also has some slight degenerative bone disease in his thoracic region. It’s a minor case but coupled with the arthritis it could be
affecting nerves extending into his back legs. He also had overly large ball sockets in his hips. The latter is also common in bullies.

The good news is nothing was critical or urgent. No need for any invasive surgeries. No tears or cysts. His knees and leg joints were all in excellent condition. The primary culprit was the arthritis, which we can treat with meds. The vet said he probably won’t see any severe impacts from the bone degeneration for 2-3 more years, hopefully. That is a guess of course. It’s moving very slowly. And the large ball joints are of concern but no apparent weakness or separation fears right now.

I’ve marveled at Cooper’s health for so many years I had honestly begun to think he wouldn’t develop any health problems. I’m relieved they are still so minor. The vet and techs all commented on how well behaved and what a trooper he was. He apparently also did very well under sedation. They barely needed to give him oxygen to keep his intake normal. For a bulldog, that is exceptional news. It made me feel better about any future need to sedate him.

When I picked him up, he’d only been awake for about 40 mins and he clearly
recognized me. That was a great sign. I could tell later on he was fighting the
after effects, which made him even more adorable.

Plenty of folks reached out to me on social media and in private with best wishes
and sympathy. Thank you all so much. It made me feel better while I was so nervous.
And as an added update, two days later and the limp is gone once again!

About once a year, Cooper’s skin issues get really out of control. Being a bully and white, he really struggles with it pretty much constantly. I manage them pretty effectively most days but every so often it just goes berserk; necessitating a visit to the vets office. 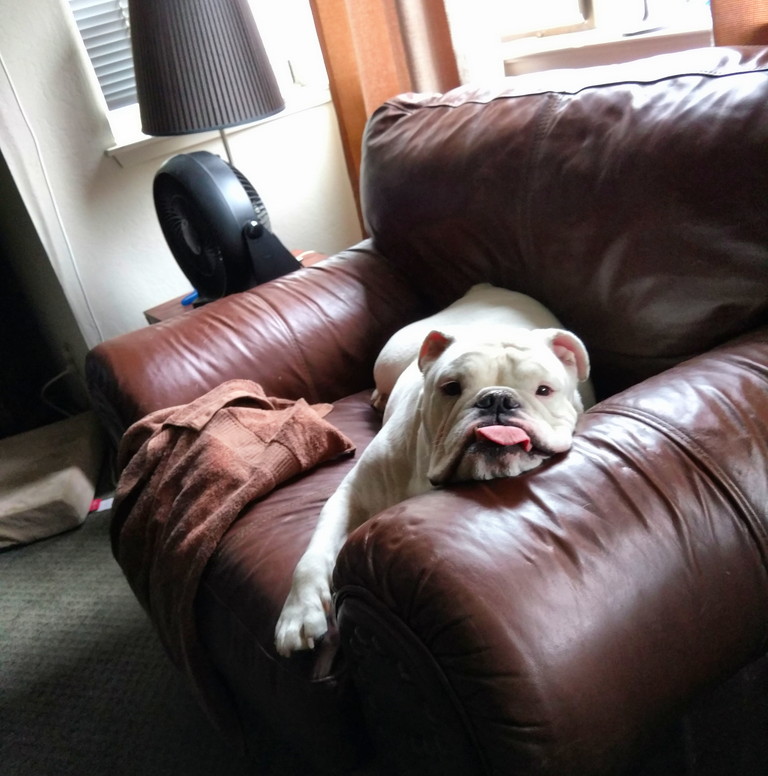 He was recently exposed to fleas for the first time and it set him off like a rocket. I took him off his flea meds as he just never spends much time with other dogs. He has never picked up fleas from the park so it seemed overkill. Clearly a decision I need to rethink. He was scratching and itching like crazy. It also made is other skin issues flare up something fierce. Time for a vet visit.

Having felt a little disgruntled with treatment over his skin problems from the SPCA, I decided to switch to a new vet. Don’t get me wrong, I still highly recommend the SPCA vet clinic here in SF. For trauma treatment, they are the go-to place. However, they don’t always seem to have good experience for special needs dogs like bulldogs. Or at least not in my experience. I’ve had more than one frustrated visit so I decided to make a switch a while back.

I did an old fashioned google search for vets w/good Bulldog experience and found Avenues Pet Hospital here in the city. I was not opposed to going further if need be. And while slightly further than the SPCA, they are right off the MUNI so getting there is quite easy. Cooper loves to go on MUNI.

I felt good just walking in. While in a much older and smaller building, they had a bulletin board full of pics and a large percentage were bullies and frenchies. Score 1 point. The female vet was super friendly and eagerly greeted Cooper and made contact with him as well as myself. Score 2 points. We discussed his ongoing issues, the recent flea outbreak, and his history. She understood his situation almost immediately. She got bonus points for knowing his color makes him all the more sensitive. Obviously, the first goal was to get his flare-up under control. Thru a combo of oral and topical meds, he is much better two weeks after the fact. Actually, he even seems to have more energy than usual.

On our follow up visit, I was again impressed with the expertise and recommendations for Cooper. She was open to trying various treatments to find one that works best for him. We discussed long term care options. As loathe as I am to put him on permanent meds, it might be the best solution. We are trying a lower dose broad spectrum antibiotic that is 1 pill a day plus a topical shampoo with meds to help kill bacteria on the surface of the skin as well. He started the meds this week and we’ll see how he does. If it is effective, it gets reduced to 1 every other day but he’d stay on it.