Being a typical vain fag, I’m a member of several online gay muscle sites. I’ve gotten alot of requests from guys wanting to know what I looked like before I started working out.

Well folks, seeing is believing! The pic below is me circa 1990. This is me before I knew what working out was all about. (It was also me when I HAD hair). 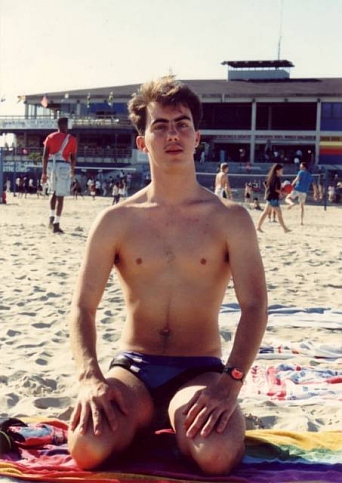 As you can see, I’ve changed quite a bit since then. My goal was never to be huge, just bigger. I didn’t actually start working out in earnest until early 2000. I’ve never been one to work out so I could impress others. I got tired of being so damn skinny a good gust a wind could blow me away. Now don’t get me wrong, I like the attention I get now that I’m bigger. That said, when I started working out for my reasons, I stuck w/it. Its become a part of my life that I can’t go without. I don’t live for the gym but I go often.

On a related note, I got the chance to experiment w/a low impact steroid about a year ago after recovering from a bad case of food poisoning. By low impact I mean a pill version w/limited side-effects. While it did give me a really good pump, I found that my sex drive increased exponentially. And while this may sound like a good thing, let me explain. I’ve always had a strong libido. If you know me, you know I ain’t lyin’. So after about 2 weeks, it got to the point where I could not focus on a single task without thinking about sex. When I could get it, where, from who, how often, etc. After a while, it began to affect my daily routine and my job. I know what your thinking…”I’d kill for that” right? Wrong! When it starts affecting your life on a fundamental level, its time to quit. And quit I did.

Afterwards, I did manage to keep a little of the bulk I had gained but not much. What goes up must come down. The same is true for the body. While I peaked performance on the drug, I went thru a dip after coming off of it. My desire for sex evaporated. For the first time in my life, I knew what it meant to not be in the mood. I also couldn’t muster the same amount of energy to workout. I’d go for days w/o even going to the gym. After about 2 weeks I leveled out to normal again. I can only imagine what the stronger injectable versions would do to you. Yikes!

So the long and short of it is simple. I’m proof positive anyone can workout and improve their appearance. Its no always easy but, if it was everyone would do it.

Thats my story officer and I’m sticking to it!