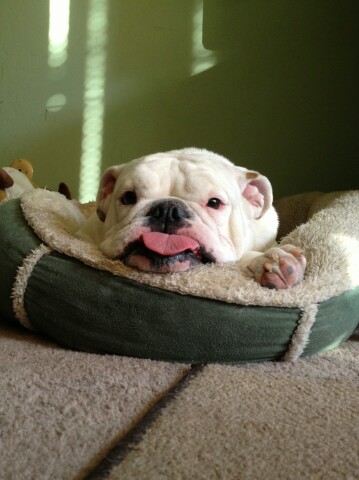 Everyone has been asking about the Cooper. He is doing just fine. As you can see, he is sitting pretty and feeling good. We’ve had two years together this past November. What started out as a abandoned and unloved puppy has turned into a loved, valued, and wonderfully well adjusted bully. He is back down to a slim 62 lbs. And while learning to enjoy the life of leisure and comfort, he is still very active for a bully. Not to mention, having a toy been that is constantly being replenished. Update – I may have to start watching him with squeaky toys. He usually will chew the squeaker till it pops out and then ignore the toy. One toy recently we never found the squeaker so he may have taken to just eating it. The next one I’ll be watching….

We have noticed his hearing is a little off. He hears ok but has a lot of trouble triangulating where the sound is coming from.  While I’m hopeful, it won’t surprise me if he develops real hearing issues as he ages. I’ll still love my deaf monster as much as I possibly could if it happens. Beyond that, his skin is a constant battle to keep healthy. He is very prone to staff. Not surprising but still a frustration. Luckily, that is all so far. as he moves into adulthood more issues could pop up, but for an all-white bully, he is remarkably healthy so far.

Anything new still scares him at first but he is much less skiddish these days. He has become bored with the MUNI cable cars, skateboards, pigeons, and random recycle bins. They seem not to have the same “oh shit, hold onto the leash” fascination as they did previously. He knows the neighborhood pretty intimately now. He often times figures out where we are going just by the route we take to get there. hehehe

His life is easy but structured. He gets his meals, treats, and breaks pretty much on time consistently every day. I’ll probably be able to eliminate is mid-day pee break in this next year as he has mastered the art of holding it. The only mishap was once while I was gone, he peed on the floor for attention. Well that and every so often he’ll just randomly barf up his entire lunch. He proceeds to eat it a second time but it tends to leave a sticky stained mess on the carpet, which always needs attention.

I will admit every time he hacks or coughs I freak out a little bit. Apple guy and I discovered Spike’s cancer that way and I’ll always be scared the same will happen to Cooper. Of course, so far his hacks are always after food so once the irrational fear passes reason sets in. Just the thought of Cooper getting sick moves me to tears. I love him so very much.