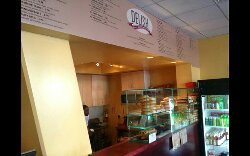 I sometimes stop by Delish for lunch when I neglect to bring food or am too lazy to prepare some. The other day I opted to have my sandwich there. Being somewhat a creature of habit these days, I got the same thing I always get, the grilled pesto chicken pannini. I ran off and left my wallet sitting in my chair.1 and someone was kind of enough to turn it in.

I freak out about an hour later, call, they have it, I run back by. One of the employees had gone out of his way to find me and try to get it back to me. Sadly, I don’t keep any phone number references in my wallet. (Maybe I should?) Anyway, I was touched that in this day and age, there is still some honesty in the world. I had about $60 in cash in the wallet, and it was still there. Not a dollar was missing.2

So, not only is the food good and the staff friendly, they’re honest! They’ve definitely earned a loyal customer and I am calling the owner so he knows of the good deed!

If you’re local, it’s on Van Ness right next to the somewhat new Phil’s coffee shop. Stop by sometime. Tell’em Moby sent ya!

Like a ‘tard, I lost my wallet the other day. Actually, I lost and then found it the next day. By then it was too late as I’d already canceled all my cards.

My buddy Nikitas and I were having a late lunch at Sliberbar, the new restaurant that opened up where Bagdad used to be. I ended up leaving my wallet on the table. We walk out and run into some friends and we spend about 15 minutes chatting before I realize it’s gone. I run back over and look under the table, no luck. I asked our waitress, no luck. I asked for the manager in case someone else had turned it in, no luck. I was so irritated at myself for doing something so colossally stupid.

Facing the reality it was really gone, I promptly called and canceled all my credit cards. This was the Sunday of the Castro St Fair so I am thinking the worst. Even worse, I immediately blamed this sketchy couple that had been sitting next to us. They came in not long before left and were gone when I came back in. Of course, I assumed they did it.

Fast forward, to the next day. I go by the restaurant again just on a hunch. Sure enough they had my wallet, minus the $20 or so in cash that had been in it. I didn’t’ care about the cash as much as getting my id and miscellaneous cards back. The credit cards were worthless plastic at this point but I still had my zip card, clipper card, work id, laundry card, etc. I would have spent a lot more replacing said cards. I then felt like an ass for incorrectly assuming the couple took it.1  I judged them based on appearance which I should not have done.  And to make matters even more annoying, it was Columbus day,2 which meant all the banks were closed. Oh yes, when I fuck up, I do it right! lol

My credit union doesn’t do temporary cards so I’m in a holding pattern until the new debit card arrives. Not to mention, all of the accounts I had tied to the card that will have to be updated. Lord what a mess. I almost never carry cash on me so everything is tied to my debit card. Don’t even get me started on the several trips back and forth to the bank for cash to cover daily expenses. Naturally, this all occurred while I was on my stay-cation. Needles to say, this put a damper on all the little things I planned to get done.

I know this is a #firstworldproblem and am trying to keep things in perspective. But cheese & crust, what a fucking mess. *kicking myself*