Booked a trip to Fort Lauderdale today. I have some more vacation time coming up soon and I think I’ll take a nice long weekend trip to relax and clear my head. I love FTL and its recovering nicely from the beating it got from Ivan. A couple buddies from back in big ole TX are gonna fly over w/me so it promises to be a good time.

On a side note, I’ve been meditating alot lately and it really helps. I’ve never really been a big fan of meditation simply because I don’t have the patience. Its amazing how you change w/age. (G) I highly recommend it to anyone. I work in a job that tends to leave me w/lots of negative energy. The meditation helps me get rid of it. Who da thunk?

Thanks to everyone who has sent me such supportive emails. I’m very flattered and truly touched. In a world thats shrinking daily, its nice to see people still care enough to reach out to another soul in trouble. Really made my day reading some of the comments. Of course, thanks go out to my blogging buddy Smitty.

That said, one particular person chose to make some really rude comments out of anger. First off, this is MY blog and I’ll simply delete the comments. DUH! That said, I’ll address your issues anyway. If you ever had any chance of getting back in my good graces, it just went down the tubes w/my breakup. He was the one person who was willing to give you the benefit of the doubt even after all your drama.

I seem to be better today. Yesterday just seemed unbearable. Some days are better than others I guess. I think its harder right now because we have to see each other every day. I just have to remember the good parts and try to put the bad behind me I guess….

He isn’t working and has no where else to stay. All my friends say I should kick him to the curb but thats just not how I operate. The revenge I’d get would only be short lived and doesn’t do anything to help the problem. Truth is, I still love him. I just have to realize that I have to let him go and hope he comes back to me before its too late. Either way, I’m moving on w/my life and taking care of myself.

Well after 3 years, I am soon to be single again. Its especially hard for me this time because I vested more of myself in this relationship than I ever have before. He was the first person I’d ever been with where I used the term we in my head. I’ve had other ltr’s but in my head, it was always me and this person, never we. He was also someone I pictured growing old with. When we met, he was living in Fresno. So many things clicked. We seemed to have similar backgrounds, similar interests, etc. Ironically, neither one was looking for a bf so the clicking just seemed so much more natural.

The trouble started after he moved here. I’m not really sure when but things have been going downhill for months now. I’ve given him room to grow as a person and experience what it is to be out and gay. But maybe my fault was in being too understanding. That said, after some ernest soul searching, I’ve come to realize what I believe to be the problem. Right now he is so focused on all the things he thinks he missed in the last 15 years (before he met me), that’s all he sees. When he sees me, he sees all the things he thinks is holding him back. I also think he will come to regret this decision. I’m just not sure I’ll be there when he does. Being a typical Aquarian, I’m loyal to a fault. Once I make a break though, I rarely go back. I give of myself 100% and when that is rejected, I am never able to reconcile w/a fresh start. I’ve tried and it doesn’t work for me.

Because so much of our lives are entwined right now, it will be months before we can completely go our separate ways. Hopefully, he’ll wise up. Regardless, I have to move on w/my life. I say this thru tears. It sounds so easy when I sit here and look at it in black and white. However, my heart says something completely different. I’m just so disappointed that things have gone so far downhill. I have to stop now…

Well today is my first day back to work and I can tell my vacation was a success. The nagging annoyance that I had before I left, seems to have disappeared. For which, I am grateful. Even the annoying callers are tolerable.

It finally happened! My stepmother is dead! Satan has left us once again for the underworld. May she reign in hell forever undisturbed.

This news is so completely unexpected as she is 10yrs younger than my dad. On top of that, they still don’t know what killed her. She went to bed one night and just didn’t wake up. It was your conscience that killed you, you mean spirited hateful bitch! (Yes, I’m bitter, and I have good reason. If you haven’t read the history, please do so now.)

I just got home from work and I’m so giddy w/laughter I can’t control myself. I know I shouldn’t be happy over someone’s death but I can’t help it. She was the bane of my existence for so long, I can’t help but be happy. She made my life a living hell as a child. Anything cruel or mean she could think of to do to me, she did. It has taken me years to work thru the anguish, feelings of inadequacy, and self-doubt that she instilled within me sometimes daily.

I have such a feeling of relief. As if a huge weight has been lifted from my shoulders. My belief is that, for whatever reasons, she was a miserable person in this life. A person who couldn’t be happy so tried to make everyone around her just as miserable as she was. All my puns aside, I hope that she has found some sort of relief from her grief. Maybe in her next life she’ll come back as a gay man adopted by white trash and they’ll kick her to the curb at the ripe age of 14.

I’m going out to celebrate tonight. I plan on getting snockered up real good!

****this is a from a journal entry about a week later****
They discovered what killed my step mother finally. Apparently, she had taken a whole slew of pills again (she was a severe pill addict) and some of the pills interacted and backed up into her esophagus. She basically choked to death in her sleep. Hows that for irony? I still say it was her conscience.

** I copied this story from an old webpage and I’ve condensed it way down for clarity/simplicity. Even still, its a bit lengthy so you might wanna grab a cup of ‘joe’**

First let me say as tragic as my childhood was w/my foster family it could have been a lot worse. Kinda hard to believe but I’m digressing….

Birth – 1yr:
I was born in the early 1970’s to the not-so-proud parents of Wanda Clem & Roy Seymoure. My mother met my father while he was in the service and after he was discharged they married. I was the 2nd sibling at the time and an unwanted/unexpected pregnancy. My mother & father were hard core drug users before, during, and after her pregnancy. I was born 2 months premature and addicted to several drugs. I spent the first 9 months of my life in a hospital surrounded my machines and strangers. By some miracle, my mother managed to get me home. I’m sure the laws then were much laxer in relation to child/drug abuse. You’d think the issue w/my hospitalization would have been a wakeup call to my parents. Nope! My parents continued their drug habits. I would be left alone in an empty closet or an open dresser drawer for hours sometimes days at a time w/nothing but a pillow and bottle. When CPS (Child Protective Services) found me, I had a diaper rash from my neck to ankles. I was returned to the hospital for 2 months for severe dehydration and related ailments along w/multiple contusions/bruises all over my body. This time I was not returned to my parents. As luck would have it, my real mothers best friend, told my foster mom/dad about me. My foster mother told me once, she took one look at me and fell in love. My adoption was just a matter of formality after that. So I went from being the unwanted son of Mr/Mrs. Drug Heads to the first and only adopted child of Mr/Mrs White Trash Family Robinson. (yes, I’m poking fun here)
END_OF_DOCUMENT_TOKEN_TO_BE_REPLACED

Ok, here is my rant for today. I’m just home from watching Hero and what a great movie. If you like Crouching Tiger Hidden Dragon, you’ll love this one. The cinematography was flawless and the plot kept twisting back and forth. You didn’t really know how it was gonna end until it did.

Anyway, about a third of the way thru the movie, these two biddies come in and sit down two seats over from me. They proceed to have a conversation all the way thru the movie. Not wanting to be disrespectful, I finally got up and moved. You’d think that would have been a signal right? NOOOOOOO They got louder! Another 10mins go by and I give a polite but unmistakable “ssssh!”. Did that work? NOOOOOO. So finally, during a crescendo of their carcophony, I stood up and said, “Would you two mind shutting up so the rest of us can HEAR the movie?” I shit you not, people started clapping. I guess I wasn’t the only one being annoyed. The pathetic part is the theatre wasn’t even that full. Its Wednesday at the 4:30pm showing.

The only thing worse than a cellphone ringing during a movie is chatty cathy and sister sally gabbing. What happened to being respectful of others? If you wanna have good conversation, go to a coffee house and bleat till your lips fall off. Don’t do it in the middle of a movie. Ok, I feel better now.

Me making a face at norm the camera man. Yes I was tired/hungry. The gent to the left of me is the 1st runner up. 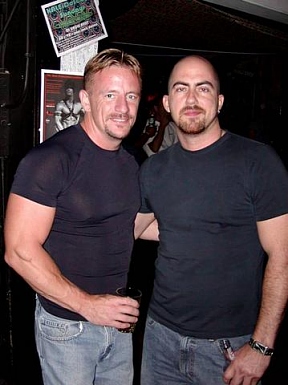 Drew and I at the Powerhouse supporting a friend running for Mr SF Leather 04 (ps..he won!)